No word on an Octodoc sighting, but still probably not the best country to have 8 babies: 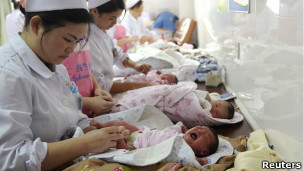 A debate on surrogacy and equality has arisen in China after it emerged that a wealthy couple in Guangdong are being investigated for having eight babies – five by surrogate mothers. The couple spent almost one million yuan (US$157,600) on in vitro fertilisation and hiring two surrogate mothers, reports the Guangzhou Daily.

China has a one-child per family policy and surrogacy is illegal. Those who break the rule face fines and potential jail terms. The unidentified couple turned to artificial insemination after trying ”in vain for years” to conceive naturally, according to Chinese media reports. After successfully fertilising eight eggs, they hired the surrogate mothers. The woman gave birth to three babies herself.

The babies were born between September and October 2010. Authorities only found out about the four boys and four girls this year. ”This is not merely a case of excessive births but one about illegal surrogate pregnancies,” a spokeswoman for the Guangdong Provincial Family Planning Commission told AFP news agency.

The case, which is being investigated by the health department and other officials, has generated waves of comments on the internet. However, it is not the ”excessive births” that attracted the most interest. The fiery debate is over issues of illegal surrogacy and social inequality.

Despite a law against surrogacy, it remains a grey area as there are a number of Chinese websites offering surrogacy “services”. These illegal “services” have been on the increase in recent years, the BBC’s Chinese Service reports. Some of them even offer a comprehensive range of packages from “economic” to “luxury”, according to its report. In order to avoid scrutiny, some of these agencies send surrogate mothers to countries such as Thailand or India for artificial insemination, and have them return to China to give birth.

It can cost up to one million yuan for a “complete surrogacy package” for a baby boy, a web search by the BBC reveals. Boys are valued over girls in China. This means that only wealthy couples are able to turn to surrogacy as an alternative means to have children.

The couple in Guangdong hired 11 nannies to help look after their eight babies, Chinese media report. Chinese internet users have been expressing outrage at the social injustice of what have been termed “unfair births” – whereby rich, childless people break the law and have babies by alternative means. ”Since they are so rich, they should be fined at least 80% of their total assets,” says one web user.

In recent years, China has seen decreasing fertility rates. This is partly due to the phenomena of couples having children later in life due to career pressures, or the difficulty and rising cost of buying homes. ”For the rich and famous, money can buy anything,” adds another commentator on the internet. ”Are family planning policies directed only towards the poor people?”

No comments for “Octomom II, The Chinese Sequel”