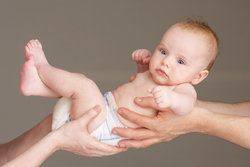 It took 24 years, but this is a definite step in the right direction…assuming Republican Governor, Chris Christie, signs off:

New Jersey’s strict surrogate parenting laws, untouched since the 1988 landmark Baby M case, would be relaxed and clarified under a bill that won final passage by the Legislature today. The bill would eliminate the three-day waiting period for parents of children born to surrogates to be listed on their birth certificates.

The Assembly voted 41 to 33 with two abstentions to approved the bill. The Senate approved the bill 21 to 11 on May 31. Now it’s up to Gov. Chris Christie to sign it into law or veto the measure.

Those who opposed the measure included BettyLou DeCroce (R-Morris) who predicted it would “create a breeder case of women.” Assemblywoman Caroline Casagrande (R-Monmouth)urged her colleagues to “think of the emotional well being of these women” who may encounter “serious psychological issues” under such agreements.

The state has not updated its surrogacy law since the Baby M case, which defined the legal relationship between a surrogate using her egg and a husband who used his sperm to conceive a child. But that case involved artificial insemination, not in vitro fertilization, which is what sparked the bill involving a Union County couple.

The state Bureau of Vital Statistics initially allowed the couple to be listed on their son’s birth certificate after the three-day waiting period. But state went to court to block it because the intended mother had no genetic or biological tie to the infant – conceived with an anonymous donor egg and her husband’s sperm. She had to adopt the baby despite a surrogacy contract recognized by a judge.

The couple’s attorney took the matter to the state Supreme Court; a decision is pending.

The bill, (A2646) requires the “gestational carrier” to surrender custody of the child immediately upon the child’s birth. The woman carrying the baby would be permitted to select her own medical care before and after the child’s birth, and be reimbursed for medical expenses.

There has been a 28 percent increase in how often people use gestational carriers to have a child since 2007, according to data from the American Society of Reproductive Medicine, cited by the Senate Democratic office.